Yellowstone, with a hand from the pandemic, kept us waiting more than a year to find out whether Season 3’s unhinged finale was last call for John (who’d been shot), Kayce (who’d been shot at), Beth (who appeared to have been blown to smithereens) or Jimmy (who’d been left all bucked up by his ill-advised latest tumble from a bronco). Aand… ? And if you read on, we’ll not only reveal which if any of them wound up sporting a toe tag in Sunday’s Season 4 premiere double header, we’ll go over all the highlights of “Half the Money” and “Phantom Pain.”

IN EPISODE 1… | As we began the first of the two hours — which were, in a word, spectacular — all hell was breaking loose. While Rip had John choppered to the nearest hospital, Kayce lobbed a grenade (?!?) at his attackers, then gave pursuit with his Livestock Commission deputies. Beth emerged from her office in one piece but worse enough for wear that Kelly Reilly was clearly going to be spending another season in injury makeup. Meanwhile, back at the ranch, an assailant was beating the crap out of Monica when kaboom! Tate freaking shot him! (If this opening was any more intense, I would’ve wished I’d been wearing a diaper when I watched!) Out at the stables, as Laramie sobbed and another gunman was “dispensed with,” a horrified Mia discovered Jimmy looking — but only looking — dead as a doornail. Finally, after a no-holds-barred, completely insane shootout with the bad guys on the highway, Kayce realized that oops, he’d been hit and collapsed. “He’s a goner,” said the music cue. But the music cue, we’d later learn, was a dang liar! And as we were reeling from Jimmy and Kayce’s “deaths,” Rip got back to the Yellowstone only to find his place burned to the ground. 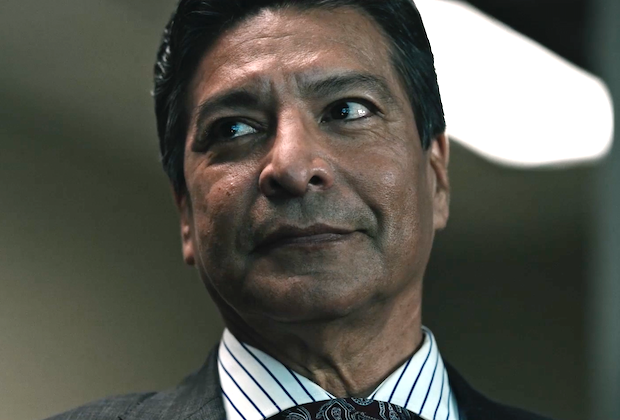 Whew. No sooner had we started to catch our breath than we’d flashed all the way back to 1893 — a decade after the series’ prequel. During our brief stay in that era, a Dutton ancestor gave a group of Native Americans the OK to bury a relative on the land that used to be theirs. (This will be important later; stick around.) From there, we flashed not only back to the present but to far enough into the future that John had grown a beard; he was going to be OK, it seemed. Outside the hospital, Beth met and was almost immediately taken with Carter (new cast member Finn Little), a 14-year-old Mini-Rip whose junkie father conveniently croaked that very day. “F—k you,” Carter told his brain-dead dad, “for leaving me in this place with nothing and nobody.” If Beth hadn’t already loved the kid, she sure as s—t fell right then and there. “I like your style,” she told him. “I don’t have a style,” he replied. “Yeah, you do,” she countered. (Jeez, could maternal Beth be the best Beth yet?) At Rainwater’s casino, a patron named Jesse mouthed off so loudly about being the “party planner” who’d arranged for John to be shot that the chief had Mo incentivize him to reveal the identity of the person for whom he’d planned said party. “What they did to John Dutton hasn’t been done since they did it to us,” Rainwater said. “We need to know who’s trying to take his land, because they’re coming for ours next.” 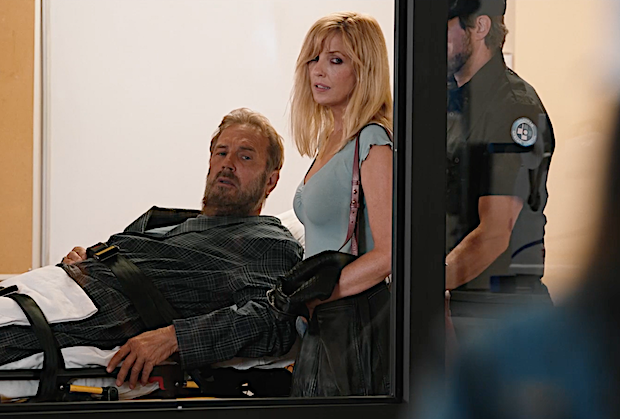 When at last John was released from the hospital, he glimpsed on his way out Jimmy undergoing PT. “What happened to him?” he asked. “It’s on a list of things we need to discuss,” Beth replied. “A long list.” At the Yellowstone, John immediately ditched his IV and fired his nurse. And who did he see coming across the lawn in camo gear that made him look like Sigmund the Sea Monster but Kayce. (Keep in mind, this was the first we’d seen or heard of him since the show tricked us into thinking he’d been shot dead in the opening.) Though it was all well and good for Kayce to be out hunting whoever had attacked them, John noted that what they really needed was to know who’d sent their attackers. For her part, Beth thought that she already knew. So she paid a visit to Jamie, accused him and promised to kill him. “But when I do it, I’m not gonna farm it out like you, you f-king coward,” she hissed, “I’m gonna do it myself.” Of course she is. Rip, on the other hand, seemed to believe that someone else had been behind the attacks. To that end, he interrupted Roarke’s morning of fly-fishing to ask if a cooler was his. What? No, said Roarke. Nonetheless, Rip tromped into the lake, opened the cooler and hurled a freaking rattlesnake at Roarke’s face! “Good riddance,” Rip muttered as the exec exhaled his last breath. 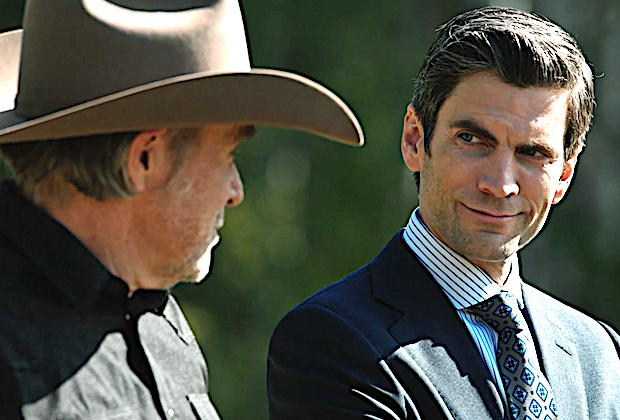 IN EPISODE 2… | At the start of “Phantom Pain,” John and Kayce put their heads together about the sender of their attackers. Kayce, pointing out that Jamie hadn’t sold but merely leased Yellowstone land to Market Equities, didn’t think that his brother was behind the attempted murders. “Killers,” he theorized, “don’t seek their victim’s approval” the way Jamie did with John. So who, then? Kayce reckoned the militia had acted on its own, as payback for what the Duttons had done to them following Tate’s abduction. In that case, said John, “We’re gonna kill every goddamn one of ’em.” Elsewhere, as Garrett whispered in Jamie’s ear that it was time for him to grow his own shadow, the attorney bought a 1,000-acre cattle ranch of his own. At the same time, Market Equities workmen accidentally dug up — told you they’d be important — Native-American relics, thereby bringing progress to a halt. Immediately, in flew Market Equities bigwig Caroline Warner (new cast member Jacki Weaver). How big a wig was she? So big that when Ellis said he wasn’t late to meet her, her plane had been early, she shot back, “I am never early, and I am never late. I am the constant your time adjusts to.” Snap! Quickly, it became apparent that Caroline would have a different approach to Market Equities’ issues than Roarke or Willa had. She’d stop stoking their nemeses’ fears and instead feed their greed. To that end, she offered to fund Rainwater’s casino build if, instead of the usual cheesy kinda casino, he made it the highest of high-end establishments. And what did she want in exchange? With a glance at her paused construction, she said that all he had to do was “stop holding up the thing that will deliver your customers.” 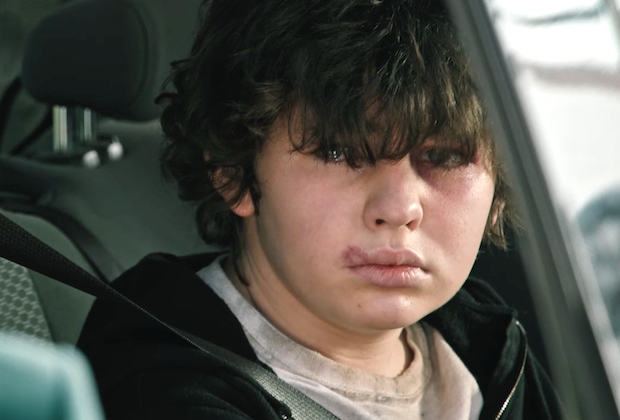 Back at the ranch, John focused on building a legacy by purchasing from Travis crazy expensive horses and sending him on the road with them. “He puts the whore in horse trader,” Rip had to admit, “but if he’s riding for the Y, he’ll be true to it.” That being the case, John was all in, expense be damned. “When people think of horses,” he said, “I want them to think of the Yellowstone.” Elsewhere, Beth met with Bob, who had the audacity to bring up her severance package. Seeing whole new shades of red, she recommended that he retire before she took everything that was his. “You shouldn’t pick a fight with a bigger bear,” he warned her. Unfazed, she smirked, “Ya gotta read the fine print [on my contract], Bob. I’m the bigger bear.” Returning to the ranch, Beth was met by Sheriff Haskell with a kid who’d tried to rob a convenience store and, when caught, had said she was his guardian. Yeah, guess who — Carter. She wanted to resist the urge to take him in, but c’mon, look at that face. So that evening, she made Hamburger Helper with tuna — mmkay — and told Rip that the kid liked it, at least. The kid? What kid? “I think he might be our kid, baby.” Rip thought not and tried repeatedly to dump Carter. Just because he’d “puppydogged” Beth didn’t mean that he could win over Rip. But, bighearted as the tough guy secretly is, Carter did win him over. So rather than send the boy to foster care, Rip hired him as the ranch’s new stall cleaner. 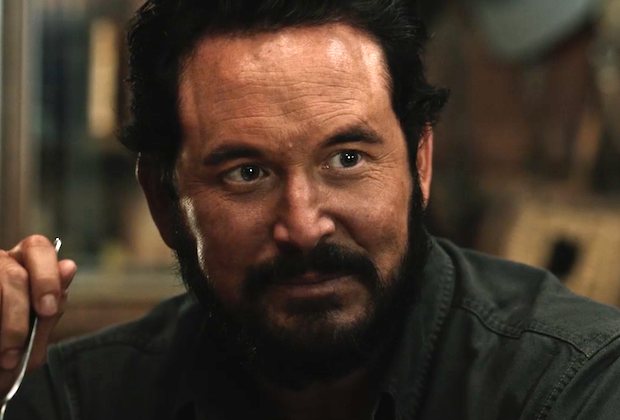 When Jimmy was released from the hospital and brought home to the Yellowstone, John broke it to him that he wouldn’t be staying. Jimmy had broken his promise to John, so the Duttons’ patriarch was done trying to make a man of him. Now that task had been left to Travis, with whom John was sending Jimmy on the road. Aww. Bye, Jimmy. As the second hour of our two-parter neared its conclusion, Rip, the closet softy, couldn’t bring himself to leave Carter at the bunk house. Instead, he brought the kid home to Beth, who’d made Hamburger Helper again — but this time with actual hamburger. And if the three of them weren’t the cutest f—king picture of domesticity, I don’t know what is. The following morning, though John had only said “maybe” Carter could stay on as stall cleaner, the youngster won him over, too, by being first in the stables. Well, second, noted Carter, worried that John had beat him there. No, “you were the first one here,” John assured him. “That’s a good sign.” If he didn’t make it back later, Carter should send a search party. But where? Carter didn’t know where John was going. “Guess they’ll just have to earn the title, huh?” cracked John. Thus ended a fairly perfect season premiere. So, what did you think of the way Yellowstone kicked off Season 4? Grade it in the poll below, then hit the comments with your thoughts, observations, critiques — the works.