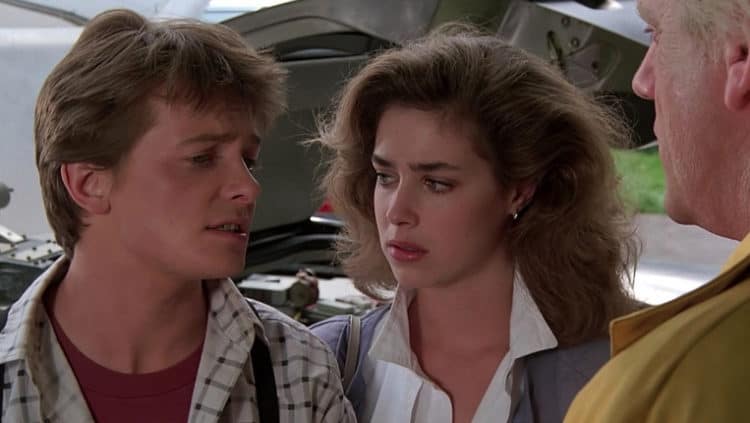 You didn’t have to be paying that much attention to note the Jennifer from Back to the Future changed drastically in appearance from the first to the second movie as Elisabeth Shue took over the part from Claudia Wells, but the thankful yet sad part of this is that Wells stepped away because of a personal tragedy in her life. Her mother had stage four lymphoma at the time, and there was simply too much going on in her life for Claudia to continue with the role. Shue turned in a good enough performance to make it possible for a lot of fans to forgive the replacement, but Claudia’s time in the spotlight wasn’t entirely over since eventually she did come back and she did even start a menswear company that’s been thriving for many years now. Plus, her career didn’t end after it was put on hiatus, as she did manage to come back and take on several roles to keep the ball rolling so to speak. She did manage to keep a strong relationship with Michael J. Fox, with whom she’d had great chemistry on set, as their friendship became something very dear to her. She’s even showed up to various conventions for Back to the Future and been readily accepted since she was a noticeable part of the first movie.

This shows that there is some unity in a cast despite the fact that they might not have worked on more than one movie together since Claudia did set the stage for Elisabeth to come in and take over. The fact that she maintained a friendship with Michael J. Fox is inspiring in a way, and the fact that she didn’t give up on her career entirely is even more so since it shows that she managed to overcome personal adversity and kept going. There are times when celebrities are more than just pretty or amusing faces to watch and enjoy since it’s easier to relate to them when realizing that they are human beings that, despite being privileged beyond belief at times, still do have a lot of their own issues that they have to work through. The constant balancing act of reporting on celebrities is one that a lot of people might look and claim to be a hypocritical mess that consists of just as much spin as any political argument that people might be stuck in on any given day. But there is a huge difference, and it comes from realizing that as much as people can get down on celebrities or idolize them, it’s all a farce. Some celebrities do tend to abuse their status and make it evident that what they’ve been given is too much and that they’re not worthy of even half of the praise that they’ve been given, while others either don’t get enough or are happy with what they have and can be said to have earned every bit of the praise they receive. It’s a mixed bag really, much like the rest of humanity, the only difference is that the spotlight is constantly on celebrities and anyone else in the public eye, while those that happen to be the public are only highlighted now and again when someone does something that, to others, is worthy of note.

The point here is that celebrities have as many issues in their lives on average as the most random citizen might, and in Claudia’s case the reason she stepped aside from one of the greatest movie franchises ever was that she had too much on her plate that time from an emotional standpoint. She made what she felt was the right decision for her, and she stuck with it. After that, she went back and continued to pursue a career that she cared about and was grateful for the chance. She didn’t end up blaming anyone for her plight or troubles, she didn’t rail against the idea of someone replacing her because she’d stepped away, and she still remained an integral part of the movies since she was there first when it came to being a part of the overall story, even if Elisabeth Shue is who a lot of people remember. Celebrities are just as varied in their reactions and behaviors as anyone, and those that have personal issues are usually those that feel the need to either step away for a while or find some way to cope that allows them to keep on doing what they love. Claudia made her choice and she stood by it, which is easy to respect. She’s always going to be someone that people will remember when it comes to the movies though since her character was one of Marty’s biggest concerns since the two of them were great together onscreen, and it’s not hard to see that they had chemistry.

elisabeth shue back to the future